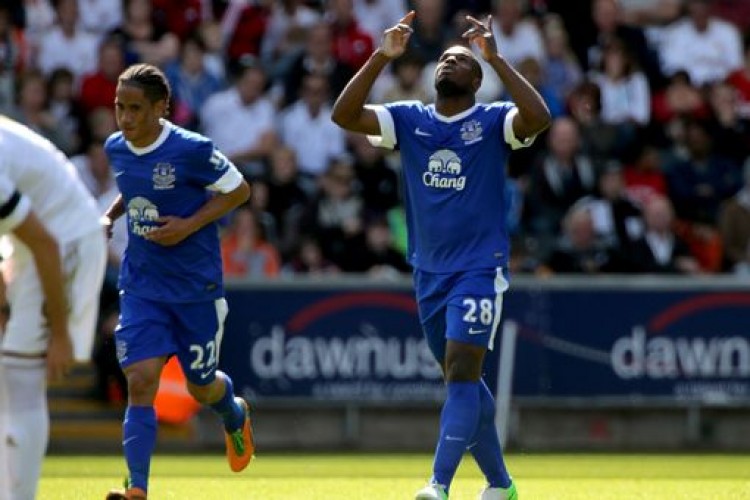 Imagine being a Swansea supporter, looking forward to the match all week, rolling up to the ground in the sunshine, full of hope and expectancy, only for Everton to happen.

Happen all over you.

Despite missing Nikica Jelavic and Darron Gibson the Blues were mostly magnificent. As at Villa Park they turned up, took over and played the way a big, scary top four side does. As stated after that Villa game, they looked like Manchester United used to when they were good and came to Goodison and treated us with haughty contempt.

The only criticism that could be levelled at the Toffees is that they had a mad spell either side of half time when they seemed to mesmerise themselves, such was the ease with which they were controlling the game, and all of a sudden the home side had four or five great chances to score and potentially change the whole shape of the match. Thankfully, Tim Howard, who wasn’t exactly the villain of the piece against Newcastle but definitely an accomplice or henchman, made a number of great saves and preserved a scoreline that still doesn’t reflect the overwhelming scale of Everton’s superiority.

Victor Anichebe, playing in place of Jelavic, had arguably his best game for the first team, repaying David Moyes’s faith in him with a level of effort that belied accusations of a lack of desire and, crucially, the first goal. Incidentally, for anyone who hasn’t worked it out yet, the reason that Moyes makes reference to Anichebe’s lack of confidence all the time is because he wants people at Goodison to stop groaning at every touch he has that doesn’t end up in the back of the net.

Anyway, how it took 22 minutes for Everton open the scoring is a mystery – well, it isn’t, some of the finishing was shit – but Anichebe was on hand to lash a shot past Michel Vorm after Marouane Fellaini bamboozled futuristic space commando Ashley Williams with a chest trap and then inadvertently elbowed the ball past Alan Tate’s attempted clearance. Even Michael Laudrup conceded that Everton deserved that slice of fortune.

The second goal, just on half time, was a thing of beauty. Kevin Mirallas’s eventual finish was like a Phoenix From The Flames recreation of the 1995 FA Cup Final, with the Belgian playing the parts of both Graham Stuart and Paul Rideout as his own shot from Steven Pienaar’s raking low centre came back off the underside off the bar and sat up for a header into the open net. The move started deep in Everton’s half though, as Phil Neville expertly ushered Michu off the ball and then played it inside for Seamus Coleman who in turn found Fellaini. His pass down the right sent Pienaar into space and the rest, well, it’s described back there, and you’ve already seen it on the telly.

Coleman had a steady game at right-back in place of the injured Tony Hibbert, and you would like to think that Moyes took a leaf from Brendan Rodgers’ book of humble wisdom before the match, grasping Coleman’s head in his hands, in a tableau reminiscent of Michael and Fredo Corleone in their fishing boat, and telling the young fullback that he sees him as someone who can run, and kick the ball, and stuff.

Swansea still had some great chances though, and although you always expect the home side to exert some pressure there was a spell when Angel Rangel was missing sitters that had Newcastle United written over it. Perhaps it’s just a symptom of being a more attacking team now that we concede space at the back because we commit so many men forward.

Even 2-0 down then, there were glimmers of hope for the home team, but when substitute Nathan Dyer was dismissed for a stupid tackle on Leighton Baines following a booking for dissent, all that remained was to see how many Everton would score.

As it turned out, only one, a header from Fellaini deflected off the hapless Williams. Man alive though, some chances were missed. Or ‘spurned’, if you prefer. Does anything else ever get spurned, other than chances and advances?

Mirallas, who is just a proper, big time player – how did we get him for £6 million? – hit the bar while Fellaini and Anichebe demonstrated that for all their qualities they are not exactly born goalscorers as they both missed identical sitters, side-footing volleys wide from close range.

Overall though, it was just another mad game, with Everton at times almost frighteningly good.

Finally, it’s a shame that Everton never bought Santi Cazorla*. Not because he’s good – which he is – but just so we could sing a song for him based on the big 1992 hit by Canadian ragga star Snow.

Over and out good buddies.