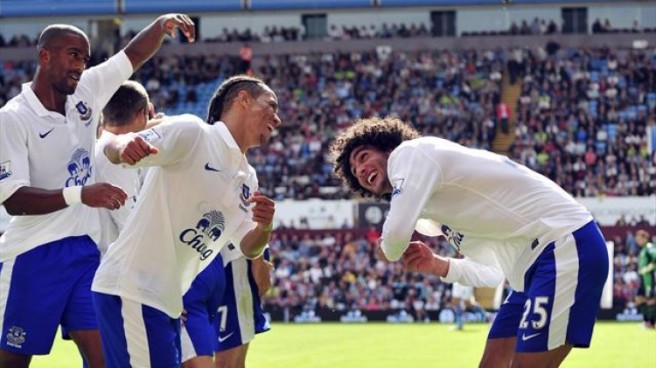 How exactly do you go about handing someone their arse?

Because that’s what David Moyes’s Everton did to Paul Lambert’s Aston Villa at Villa Park.

Would it be something that happens just before kick off? Moyes knocks tentatively on the home side’s dressing room before entering, followed by Steve Round carrying a covered silver serving platter?

“Lambo,” says Moyes, because that’s what he calls him. “This is for you.”

On that cue, Roundy – not sure whether he actually calls him that; it’s a sort of best guess, but just run with it for the sake of the story – whips the lid off to reveal Everton’s surprise gift.

“Moyesy,” it’s pretty well established that’s what everyone calls him, apart from Bill Kenwright who addresses him as David, “is that what I think it is?”

“It certainly is pal.”

“Surrounded by salad and new potatoes?”

“Correct, well observed as ever.”

“What’s that stuck in the middle of it?”

“Ah, right, well with the whole platter thing it made us think of a roast pig and, you know, they always come with an apple in their mouth. There’s no mouth here though, so we improvised, you know, and stuck it there.”

“Right, well, catering never had any apples and we were in a bit of a hurry, so again we had to improvise. I think that’s actually an avocado.”

It was only three minutes into one of the most marvellous performances of the whole David Moyes era at Everton when the little midfielder ended one of countless training ground passing routines by rolling Steven Naismith’s ball forward with his studs before looking up and picking his spot, up and over Shay Given in the far corner of the goal.

From that point on it was just relentless Everton brilliance. They looked like a serious, scary football team. Like when the great Manchester United sides have come to Goodison and controlled everything. For some reason Benfica spring to mind as well – when we played them at home the other year and they had everything: pace, power, organisation and bags of skill on the ball.

The win over United on Monday was clearly epic – in the true-ish meaning of the word, not the way young people describe a mildly amusing night out – but almost all Premier League sides are capable of pulling out a big performance against the top sides from time to time. This was far more impressive.

Fellaini was great again and he capped his performance with the second goal on half an hour. Everton’s total football was exemplified by Phil Jagielka’s freedom to burst down the right wing and send a superb cross over to the edge of the Villa six-yard box. Fellaini got Gnasher onto the ball, sending it into the turf where Given should have gathered comfortably.

Fellaini is ostensibly playing in what was Tim Cahill’s position, but he operates in a different way to the Australian. He might not pose as much of a goal threat as Cahill in his pomp, but perversely pushing him forward seems to have added something to the team defensively. Sitting deep and facing opponents head on, Fellaini was often wrong-footed a little too easily. Now though, he constantly ambushes them from behind and side-on, pushing his hip into them and levering them off the ball judo-style. It’s really effective, disrupting moves before they even get started and allowing his teammates to break quickly and, in this encounter, with devastating precision.

The third goal, on the brink of half-time, highlighted just what Everton were all about. Leighton Baines, who crucified Villa down the left, got to the bye-line and cut the ball back to Nikica Jelavic whose instinctive running had already left the defence marking fresh air.

10 yards out. One touch with his left foot. Bang.

There was more of the same in the second half, and the chances are too numerous to recount. Distin had one headed onto the bar, Baines should have had a penalty and Given made a good stop from Pienaar’s flick up and volley.

Villa’s side just seems packed with tattooed young chaps with Tom of Finland haircuts, and one of them, Ciaran Clark, was dismissed early in the second period for a professional foul on Jelavic. The Croatian accepted a great through-ball from the impressive Darron Gibson and cut across the young defender in a manner that almost demanded that he bring him down.

They always seem a bit minty those decisions, especially when it’s only a little touch needed to send the forward tumbling, but at 0-0 you would be screaming for the red card.

If anything it was just too easy for Everton then. The introduction of Seamus Coleman and a first appearance for Kevin Mirallas livened things up a bit, and the debutant came close to scoring twice thanks to crosses from the Irishman. The first centre was cut out by Ron Vlaar’s frantic lunge, with Mirallas poised to burst the net. The second was dispatched with a diving header, only for a linesman’s flag to cut the celebrations short.

Villa gave the scoreline a veneer of respectability that it really didn’t deserve when Karim El Ahmadi’s swerving shot from distance deceived Tim Howard for the game’s second goalkeeping howler.

It ended 3-1 then, but just like the last time we won at Villa Park, the scoreline really doesn’t reflect just how brilliant Everton were. 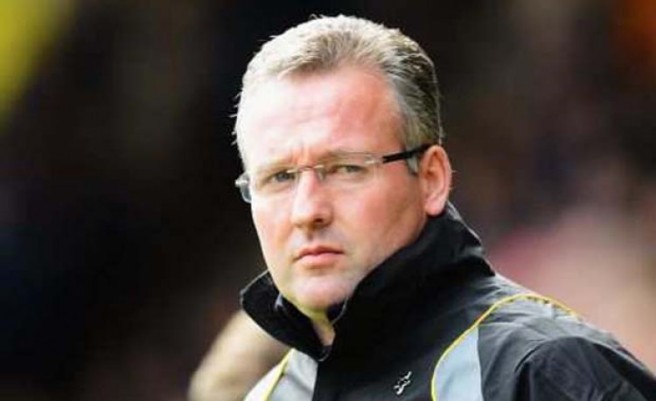 Hang on, is this right? We’ve only won once away to Aston Villa since 1987?

A quick scan through the indispensable Everton Results website seems to indicate that’s the case.

If we wanted to get an idea of just how good the present Blues are then, following that giddy result on Monday night, this fixture looks ideal. After all, it’s these awkward, thankless away games that sort the best from the rest. Manchester United, for instance, got a bit of a going over at Goodison Park the other night, but you know that they will recover and hoover up points during the rest of the season because they have the quality and depth to win the majority of games when they are playing at less than their peak.

Everton, on the other hand, need to play with an intensity that is hard to sustain over a season with such a small squad. And that’s the reason why talk of breaking into the top four after one match – where we didn’t exactly rip United a new one but certainly chafed their existing one – is extremely premature.

That said, David Moyes achieved the win over United with essentially last season’s team. Steven Naismith was only introduced briefly during what is known in coaching circles as the FUCKINGHELLJUSTFUCKINGTWATIT! phase of play whereby one side adopts a predominantly defensive formation and seeks to preserve a narrow lead.

Then of course there is Kevin Mirallas, the Belgian international who is by all accounts ‘rapid as fuck’. The neat but often laborious nature of Everton counter-attacks is a well-documented weakness that Mirallas has clearly been brought in to remedy. And just think, a year ago we were bemoaning the fact that Moyes had missed out on £10 million target Charles N’Zogbia who we all imagined coming in and lending that much needed pace to the Blues attack. He obviously ended up at Villa instead, where he has been a massive disappointment.

He’s not the only one though, as new manager Paul Lambert must wonder what the Calvin Harris has been going on the last few years, judging by the state of the squad. For instance, he currently has Stephen Warnock training with the youth team in a bid to force him and his £40k a week wages off the books. They have almost certainly given up any hope of seeing even a fraction of the eight million quid they paid for him. Yes, you read that correctly, they paid eight million for Stephen Warnock.

There are certainly some challenges at Villa then, and it will be interesting to see how Lambert copes at what is still one of the biggest clubs in Britain.

His chairman, Randy Lerner has got far more money than Bill Kenwright – i.e. some money – but he has shown some shocking judgement in his time in charge at Villa Park. Lambert, for his part, impressed everyone with what he did at Colchester United and then Norwich City, who he of course got promoted to the Premier League before, crucially, keeping them there quite comfortably. Do you reckon he secretly curses himself for not hanging fire before taking this role given the calibre of coaches who were interviewed for and then installed in the more prestigious managerial posts at Liverpool and Tottenham?

Get over it Villa fans, you know it’s the truth.

Many of the Evertonians who have little time for time David Moyes put forward Lambert as the obvious choice whenever they were asked the question, “Who would do better?” And now that their man is in situ at a club of similar stature we will find out whether he is indeed a better version of Moyes or just the next Aidy Boothroyd/Paul Jewell/Mike Newell/Owen Coyle.

One thing that Lambert does do better than Moyes – and this is quite remarkable – is give po-faced interviews. At times he makes the Everton boss look like Ian Holloway as he shoots a timorous reporter the icy stare of a man who is mentally reserving someone the prestigious middle berth in his human centipede.

He has a look of that miserable fella who lives just enough houses down from yours for you to know his face but are never quite sure whether to let on or not when you walk past and see him washing his Audi.

February 2005 was the Blues’ one win at Villa since the 1980s, and what a win it was. Two goals by Leon Osman and one by Tim Cahill secured a 3-1 win, but it was the style of play that everyone remembers. Pure school of science stuff.

The last victory there before that was, as already stated, in 1987. Kevin Sheedy scored the game’s only goal, and sadly the Irish midfield genius is back in the news this week because he has been diagnosed with bowel cancer. That’s just an awful thing for anyone to discover. All you can do is wish him, and anyone else out there suffering with their health, the very best and a speedy recovery.