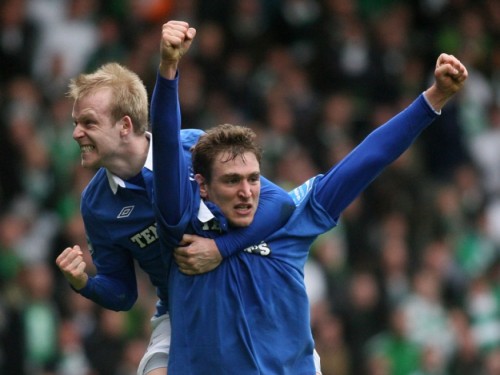 With the players back in training, it’s time to have a little muse and ruminate on just what’s going on at Goodison this summer.

For a start, there’s already been a signing, in the shape of Scottish international forward, Steven Naismith. The Toffees have been more active than anyone in picking over the flyblown corpse of Glasgow Rangers, initially snapping up Nikica Jelavic for a more than reasonable six million pounds and now recruiting Naismith on an even more agreeable free transfer.

Most of the stories in the press when Everton were initially linked with Naismith made out that both his former teammates on the Blues’ books, Jelavic and David Weir, had implored David Moyes to try and get a deal done. However, the fact that at that point neither Moyes or anyone else at the club had made any sort of comment confirming interest in the player would make you suspect a certain amount of journalistic license.

After all, the biggest factor in making Naismith attractive to Everton will have been that he sat squarely in their preferred price range, i.e. from ‘fuck all’ up to ‘next to nothing’. And the idea that managers consult with players about whether they would want them to sign some other player just doesn’t sound right anyway. Granted, Weir might be close enough to Moyes to say something along the lines of, ‘For free he’s definitely a better option than Victor Anichebe’, but there’s no way he’s had Jelavic in the office to ask his opinion.

Just imagine the phonecall a couple of days later. ‘Hey, Jela, it’s me, ‘Nace’. I’ve just heard from my agent that I’ve missed out on a fat fucking signing on fee at Everton because you said, and I quote, ‘He doesn’t even look that good in Scotland and resembles Damien Duff’s simpleton brother. Why don’t you buy Mandzukic instead? Now there’s a player and he will only cost about eight million pounds’. Cheers for that, you sleazy-informant-on-Miami-Vice-looking twat. Now I’ve had to report for preseason with Rangers, and do you know what that has entailed? Do you? Well I’ll tell you, pal. Two words: RUSH FUCKING GOALIES!’

Thankfully that hasn’t happened though, and Naismith has signed, despite the Scottish FA denying him and the rest of the Ibrox deserters international clearance. That sounds kind of serious at first, although the consensus appears to be that the Rangers newco haven’t a leg to stand on and that the players that have agreed new deals elsewhere will face no real legal problems.

Naismith himself has said all the right things since his move, although his constant stressing of the similarities between Everton and his former club could be quite quite alarming given that Rangers are currently the footballing equivalent of one of those freighters full of poisonous waste, registered in Panama and wandering the seas, mournfully looking for some port, any port, that will accept them.