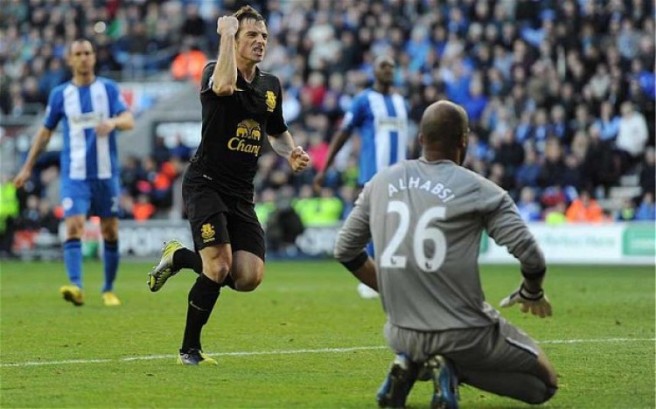 A lethargic first-half performance and some dubious refereeing meant that Everton had to settle for a point against a Wigan side who were far tougher than their early season form suggested.

An open and incident-packed match encapsulated Everton’s season so far as David Moyes’s men lurched back and forth between periods of sublime attacking football and moments of defensive calamity. They are like a bomb disposal expert with chronic hay fever: for all their patience and intricate skill they are never more than one gust of wind away from the whole thing blowing up in their face.

And presumably leaving them in a tangled wreck like that metaphor.

Aroune Kone, proudly ‘rocking’ – oh aye – the Wesley Snipes in Demolition Man look, along with Franco Di Santo and Shaun Maloney, gave the Everton defence no end of problems. The Ivorian in particular had a lot of joy against Johnny Heitinga, particularly once he realised that the Dutch centre-half runs like he’s got the takings from the penny arcade in his arse pocket.

That said, Koune’s opening goal on 10 minutes owed more to dodgy officiating than anything else. He was clearly offside when heading home at the near post after Seamus Coleman’s slip allowed Maloney the space to cross from the left. Coleman had a poor game throughout – almost nothing came down the Everton right so it was fortunate that Steven Pienaar and Leighton Baines were back to their best down the opposite flank. ‘Flank’, seriously, just how easily do these wanky terms become common currency? It’s bad enough reading them; it’s even worse when you sit near some self-appointed Don Howe at the match who calls players ‘the lad’ and uses phrases like ‘two banks of four’ and ‘setting their stall out’ with no sense of self-awareness. They seem to be increasingly common at Goodison.

Anyway, Everton replied instantly to the first goal. From the kick off Marouane Fellaini made a rare contribution by combining with Pienaar on the edge of the box. The South African slipped and sent a shot looping to the far post – the area that couldn’t be more clearly designated as Nikica Jelavic’s territory if he sprayed it with his heady Balkan musk – and the Croatian beat Ali Al Habsi with a downward header.

That should have been the cue for Everton to take control but they continued to look flaky. Fellaini had a face on him following a flare up with the admittedly unpleasant Gary Caldwell and when not arguing or committing petty fouls he spent most of the first half lazily flicking the ball about instead of getting hold of the fucking thing and doing the basics. When he plays like that you can’t help wondering whether we would actually be any worse off if he did get his big money move and we bought a specialist centre-forward and central midfielder with the proceeds.

Everything good Everton did came through Baines who was unlucky to see a low shot beat Al Habsi and strike the foot of the post following a ‘trademark’ one-two with Pienaar. It’s not really trademarked, that would be legally impractical and almost certainly bad for football as a whole.

Wigan retook the lead on 23 minutes with a goal that from an Everton perspective was more upsetting than seeing your fleeting reflection in the screen of the laptop from that weird angle when you are reclining in bed. Heitinga declined several opportunities to deal with Kone chasing a Wigan clearance down the right and eventually the big centre-forward reached the bye-line and cut the ball back for Di Santo to rifle home from near the penalty spot. Heitinga’s effort was pathetic and he was rightly replaced by Sylvain Distin at half time, but equally someone should have taken responsibility for tracking Di Santo. It’s easy to point the finger at Phil Neville.

Sorry, that’s it. Just because it’s easy doesn’t mean you shouldn’t. Point away.

At the other end a dummy by Leon Osman bought him space in the Wigan box but Al Habsi made a brilliant one-handed save from his deflected shot.

Wigan were deservedly ahead at half time then, but thankfully Everton were much better after the break.

Fellaini dropped back and Kevin Mirallas came infield and started to pose problems for the centre of the Wigan defence. The Belgian thought he had scored when he took a ball off the toes of the rampaging Baines and bent a low shot towards the far corner of the goal. Al Habsi again made a great stop.

Referee Kevin Friend, whose internal monologue throughout appeared to run along the lines of ‘Shit, the crowd are appealing for something here, I haven’t got a clue what though, I’m going to look a right ‘nana if I don’t do something, sod it, I’ll give someone a yellow card, that seems like a reasonable compromise’ left the Evertonians incandescent when he turned away appeals for a stonewall penalty after Maynor Figueoroa almost kicked Jelavic’s foot off as the Croatian attempted a volley at goal.

Schemey-looking rat-bastard Caldwell then gave Jelavic a shove in the back which strictly speaking should have been a penalty too, although the Everton striker’s attempt to ‘make sure the referee noticed the infringement’ was not particularly Corinthian in spirit.

Everton continued to apply ‘big team’ pressure though and Wigan eventually succumbed on 87 minutes. As the ball was played into the Wigan box substitute Victor Anichebe was initially fouled by Caldwell, before anyone could react though Mirallas went down – rather fucking cheaply, let’s be honest – in the vicinity of Figueroa and Friend pointed to the spot. It was a penalty, but the referee perhaps didn’t know exactly why he gave it.

Baines, who is increasingly great in just about every way – even the fact he looks more like Jane Wiedlin every week – had the responsibility of securing the point that Everton deserved against a keeper playing well and known for saving spot kicks.

Only a scrunchy mullet and chicken dance would have made the finish seem more efficiently Teutonic.

Time for a big finish?

Hell yeah, from Wigan. Regardless of who partners Phil Jagielka, opponents keep exploiting a yawning gap between the centre-halves and this time it was little Frodo-footed Maloney who got through and thought he had netted an absolute sickener only for his shot to loop up off Coleman and land on the roof of the net.

It finished all square then and it’s customary to come up with some sort of conclusion here where we point out the areas that need to improve. Let’s be honest though, it’s the same every week. Watching this Everton side is mental as they are capable of genius going forward while at the other end the defenders run around like a prison break. It’s entertaining though, and when we were dour but efficient that’s what everyone said they wanted.